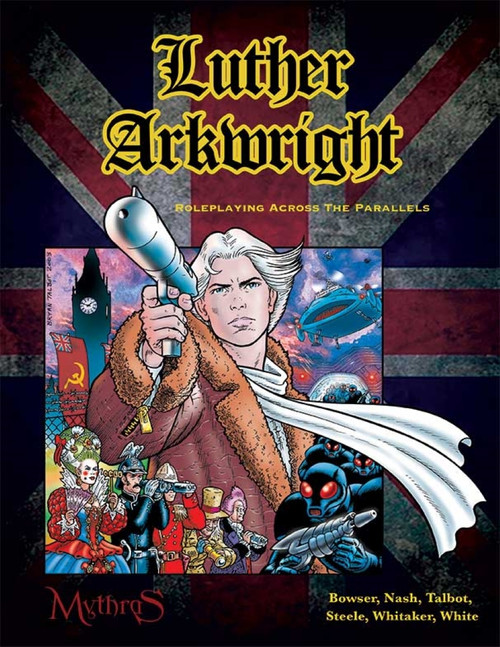 Not one Earth, but an infinity of them, existing in parallel continua, their own paths, own histories, own futures, own mistakes. Most are unaware of the existence of a multiverse; but some parallels know that Earth is not alone, but mirrored.

ZeroZero knows. It watches the parallels, ensures their stability. ZeroZero knows that instability spreads like a disease, infecting each parallel until a critical mass is reached and cataclysm is guaranteed.

The Disruptors know. And they are intent on subverting the multiverse for their own ends, to

The Valhalla Project was established to stop the Disruptors; to uncover their plans, identify their agents, and eliminate them. Their best agent is Luther Arkwright, unique in the multiverse, a powerful psychic, but himself unstable. Arkwright does not work alone: there are others.

Based on Bryan Talbot’s acclaimed graphic novels, Luther Arkwright: Roleplaying Across the Parallels is a RuneQuest supplement introducing the Arkwright multiverse and all the rules needed for adventuring in countless parallel dimensions. This book contains game rules for contemporary character creation, psionics, technology, firearms, vehicles and more!

Luther Arkwright: Roleplaying Across the Parallels

A Gift from Shamash (PDF)

Luther Arkwright: Roleplaying Across the Parallels

After the Vampire Wars

After the Vampire Wars (PDF)