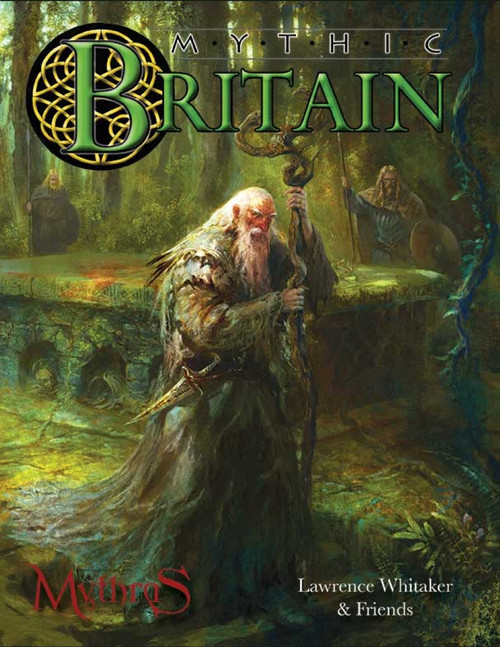 He is the High Druid of Britain.

An advisor to Boudicca when she challenged the Romans.

Alive when the Romans massacred the druids at Ynys Mon.

Alive when Vortigern ventured north with mercenaries to destroy the Picts.

Alive when Uther’s bastard was begat by Ygraine.

He lives still. This is his world.

It is made of the breath, scales and bones of the Great Red Dragon.

It flows through him, and he is Britain.

He has walked with gods and counselled them.

The ancestors revere and respect his presence.

The Saxons tremble at his name.

Mythic Britain is a complete sourcebook for adventuring in Britain’s Dark Ages using the RuneQuest rules. The book includes an extensive history and background of 5th and 6th Century Britain; details of the different tribes and territories; complete character creation rules for Britons and Saxons, details of magic, the Saints and pagan Gods; and, rules for massed battles. Completing the book, seven linked scenarios form the Mythic Britain Campaign in which the characters travel the length of breadth of the island, serving Merlin and Arthur, fighting the Saxon invaders, searching for the lost Treasures of Britain, and becoming involved in all manner of schemes and intrigues.

Take up your spears. Swear your oaths. Ready your shields.

Welcome to the Dark Ages!