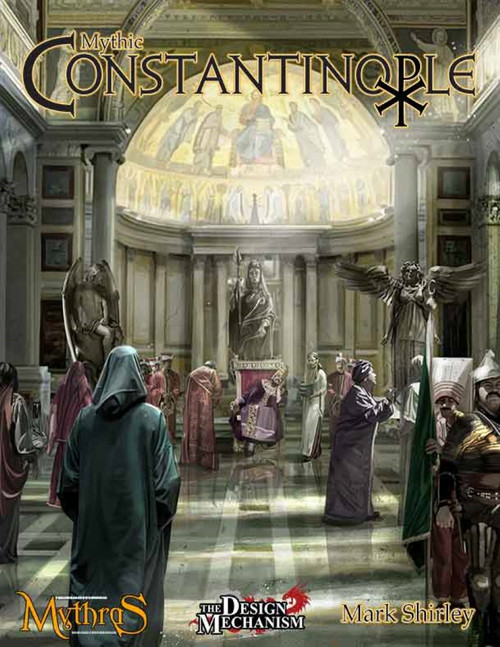 Byzantium, Queen of Cities, Constantinople, bridging Europe and Asia like a jewel, the epicentre of medieval culture. The year is 1450 or, as the Byzantines reckon it, the 6,958th year since Creation.
This is an age of exploration and invention; an age of intrigue, and an age of empires. The known world congregates here: mercenaries from England and Russia; the wealthy merchants of Genoa, Venice and Tunis; the Ottoman Empire and the Mamluk Sultanate face off against each other while the iron-clad Knights of Rhodes debate theology with Neoplatonists.
And it is home too to the non-human species of the world, such as the inscrutable Astomatoi, the fearless Minotauroi, and the headless Blemmyai. In the Undercity are ancient horrors with agendas of their own, things of legend and myth that have inhabited Constantinople for thousands of years.
Meanwhile the Muslim Ottoman Empire eyes the city with envy and draws its plans. The Catholic and Orthodox Churches seek to dominate Christianity while, elsewhere, pagan forces and cults wait for their own opportunities to surface.
Mythic Constantinople is a thorough and comprehensive campaign resource that mingles meticulous history with legend and myth. It presents Constantinople in astonishing detail, covering the city’s geography, history, politics, and culture alongside its landmarks, personalities, organisations and religions. It takes a unique approach togenerating street-level details of the city, and taking care to connect places, people and organisations to both describe Byzantium, and aid Games Masters in bringing the city to life in their campaigns. Play characters from dozensof cultures: native Byzantines, European mercenaries, wily Italianate merchant-venturers, intrepid emissaries of Islam,or even a non-human occupant of the city, rubbing shoulders with the Varangian Guard and schemers of the Serene Republic of Venice. The options are vast.
Everything you need to campaign in medieval Byzantium is here. Welcome to Mythic Constantinople.