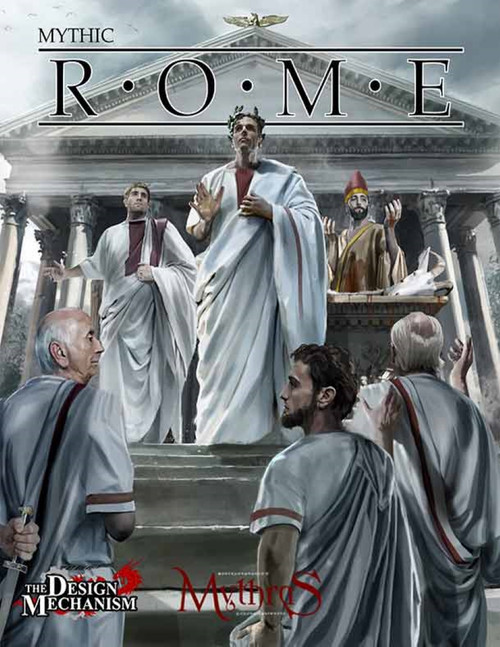 Welcome to the birth of the Roman Republic, and follow it through to its murderous end, a tumultuous ride through some of its most turbulent history.

Mythic Rome encapsulates the dark and gritty past, allowing players to take part in the founding of Rome: as a bandit on the Tiber; to overthrow the tyrannical 7 Kings; conquer the rival Etruscan city states; watch the city be sacked by Gauls; battle Hannibal during the Punic Wars; take part in the malevolent Bacchanalian Consipracy; fight alongside Spartacus (or against him); or choose sides during the civil war between Caesar and Pompey.

This invaluable book contains rules for everything from political standing to chariot racing, along with comprehensive Roman careers and guides for weapons, armour and Combat Styles of Rome’s legions and her enemies. Also included are obscure supernatural creatures and new magic systems to reflect the way magic works from the perspective of the Romans themselves.

Continuing the quality and historical depth of The Design Mechanism’s Mythic series, Mythic Rome stands as one of the very best historical roleplaying supplements, describing in intricate detail every aspect of everyday Roman life.

The book is packed with quotations from the historians and scholars of the last days of the Republic, revealing shocking details of Rome the Eternal City, a shining pinnacle of civilisation built on the grisly foundations of crime, superstition, war and treachery...